How good do you think you are at Multi-tasking?

There is a general narrative that we are all able to do multi-tasking to some degree or another. Some are good at it, and others are not. But, research shows that we are, in fact, all rubbish at it and those who claim to be good multi-taskers … are actually the worst at it. 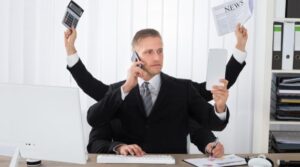 The reason being that the processing part of our brains used in completing tasks is very selective regarding how much it is able to hold, and can only process one thing at a time – switching our focus between one task and another, rather than processing tasks simultaneously.

When tasks are simple to perform or almost automatic (like, for example, making a pot of tea and slicing up a cake), the attention switch is so rapid, and the lag between the tasks so seamless, we get the sense we are effectively multi-tasking.

However, when the tasks are more complicated and we are then disrupted the goal of the new task appears, in our attention span, at a higher level of activation than the originally abandoned task. The memory trace for the abandoned task starts to fade so that when you return to it there is a resumption lag – which involves reactivating the fading memory trace of that abandoned task.

The longer the task has been abandoned, the longer it will take to rekindle that memory trace, which can be anything up to 5-15 minutes.

Now, taking into account the fact that the average office worker is interrupted every 3 minutes, and it takes around 30 seconds between getting a notification and reading it, it is no surprise that we can open up a document at the beginning of the day and have progressed very little by the end of the day.

This mostly happens when we leave our emails and messenger apps open while we are trying to get deep work done. The more emails and apps that interrupt us during the day, the longer it will take to finish a task and the more likely work pressure will increase – which leads to greater levels of stress and anxiety.

We also know from research that frequent multi-taskers over time:

Are you good at simultaneously juggling different tech or apps?